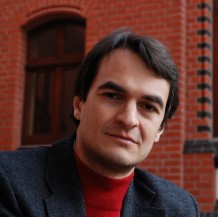 Winner of the Thirteenth International Frederic Chopin Competition in Warsaw, Philippe Giusiano is considered the reference with regard to the works of the Polish composer. After coming eighth when he first entered the competition at the age of 17, he won first place five years later in 1995, being a public and press favorite. When his second Chopin CD came out, the following was said: “…one has the feeling that this is how Chopin played” (O. Bellamy - le Monde de la Musique).

This success at one of the world’s most famous competition placed Philippe Giusiano among the top pianists and led to appearances at some of the greatest concert halls, among other the Carnagie Hall in New York, the Concertgebouw in Amsterdam, the Verona Theater, the Scala in Milano, the Théâtre des Champs-Elysées and the Salle Gaveau in Paris, the Suntory Hall in Tokyo…

In 2010, Philippe Giusiano represented Chopin’s music with unanimous success in France, Spain, Middle-East, Japan, Poland and all Scandinavia. He performed on this occasion all Chopin’s works for piano and orchestra as well as almost all Chopin’s solo pieces. Together with five other Artists, he performed for the French Television Channel “Mezzo” all complete solo works by Chopin in chronological order. Besides, his performance at the closing concert during the Nantes Folle Journée Festival was broadcasted live on “Arte” Channel.

His recordings edited in France and in Japan are mainly devoted to Chopin and Rachmaninoff’s music and have gained high recognition from the critics and the auditors. His last Chopin CD with the 24 Etudes and 24 Preludes has been highly acclaimed all over the world.  “Listening to this pianist in Chopin is like attending a sort of musical genesis. The experience is unforgettable!” (Mathias Heizmann – Arte)

Philippe Giusiano was born in 1973 in Marseille, where he began studying the piano at the age of 5. He studied at the Conservatoire de Région de Marseille and later on at the Conservatoire National Supérieur de Musique de Paris where he graduated at the age of 16.  In 1993, he received a scholarship that enabled him to study at the Mozarteum in Salzburg. During all his studies, he won many prizes in National and International Youth Piano Competitions.

Beside his artistic career, Philippe Giusiano is regularly invited to give master classes in Poland and in Japan. Lately, he has been working as a guest professor at the Heisei Music College in Kumamoto, Japan.