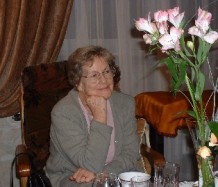 She comes from a family of teachers. Mother, Franciszka Cywicka, was a teacher of Polish language and father - Kazimierz Wachowiak, inspector of Polish schools in France, Belgium and Grand Duchy in Luxembourg. She was born in Lille. She studied at schools in France and Belgium.
Before the war she returned to Poland (Krotoszyn). The war made her emigrate to Kołomyja and then to Budapest, where she continued her education in Balato Boglár. After the war she settled in Lille, where her father was an employee of the Polish Consulate for the Polish education in the West.
She worked at the Polish Consulate in Strasbourg and since 1949 at the Polish Embassy in Budapest. After returning to Poland, she met and married Prof. Zbigniew Drzewiecki. She worked in Warsaw as a translator of TV films from French and Hungarian languages. She is the author of many texts published in Poland and France. After the death of her husband she took up to organize the rich legacy of prof. Zbigniew Drzewiecki. The priceless pedagogical, artistic and editorial legacy she donated to Academy of Music (today Fryderyk Chopin University) in Warsaw. There is a large, unpublished archive of recorded lessons with the most gifted students. This material is waiting for the release.
The Laureates of the Chopin Competition were the following students of prof. Zbigniew Drzewiecki:
1. Róża Etkina
2. Bolesław Kon
3. Jan Ekier
4. Halina Czerny-Stefańska
5. Ryszard Bakst
6. Adam Harasiewicz
7. Fou Tsong
8. Lidia Grychtołówna
9. Włodzimierz Obidowicz
10. Marta Sosińska
11. Janusz Olejniczka