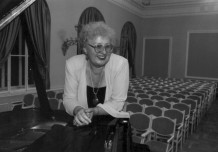 Veronika Vitaitė  has graduated from the Lithuanian State Conservatoire (now LMTA), the Moscow Musical Pedagogics Institute, has studied at the Vienna Higher Musical Education Institution (Hochshule fur Musik und darstellend Kunst in Vienna) with professors O. Šteinbergaitė, A. and M. Gotlib, H. Kann and K. Wolleitner.
She has been a teacher and head of the piano department at the High School of Music in Šiauliai, a teacher at the Šiauliai Institute of Pedagogics. Since 1974 she teaches at LMTA where she was head of the Department of Pedagogics sins1986, head of the Piano Department since 1987  ; since 1993 – a member of the LMTA Senate, the Studies Committee, Coordinational Comity, vice-president of EPTA Lithuania, chairwoman of the Lithuanian Musicians Associacion „Music and Educiation of the XXI’st Century“ board, president of the F. Chopin society of Lithuania, a member of the London Pianist Corporation Committee, professor in the piano faculty at the Lithuanian Academy of Music and Theatre (LMTA) and expert teacher at the M. K. Čiurlionis School of Art..
A distinguished Lithuanian artist, she was elected „International woman of the year 1992-1993“ by the International Biographical Centre of Cambridge. Veronika Vitaitė is the author of more than 30 articles and reviews, a compiler of various publications.
In 1964 she formed the second stable, constantly performing piano duo with A. Povilaitis which played more than 300 concerts in Lithuania, Moscow, Latvia and Estonia over it’s 16 years of creative work. Since 1980 Veronika Vitaitė constantly performs in piano duos with prof. R. Vaitkevičiūtė („Viva“) and doc. A. Žvirblytė. She has staged concert cycles with violinists A. Stulgys, R. Katilius, singers R. Maciūtė, R. Tamulevičiūtė, I. Argustienė and many other renowned artists. She has constantly taken part in „Autumn of Music“ festivals, performs with Lithuanian orchestras conducted by S. Sondeckis, P. Berman, J. Domarkas, M. Piečaitis, M. Dvarionaitė, A. Klenickis, J. Fledžinskis, R.Šervenikas. Has released records, made over 120 recordings for the National Radio Fund, recordings of TV concerts. Has been on tour in the Baltic States, Moscow, St. Petersburg, Pskov, Novgorod, Tver, Riga, Minsk, Poland, Estonia, Japan, The Netherlands, Denmark, Sweden, Cyprus, Ukraine, performed in various festivals in Lithuania and abroad. V. Vitaitė has always been an active propagator of lithuanian music, the first performer of compositions by many composers, such as V. Barkauskas, T. Makačinas, V. Bagdonas, A. Kubiliūnas, V. Švedas, F. Latėnas and others.
Professor V. Vitaitė’s students have won over 70 prizes in international competitions in Lithuania, Latvia, France, The Netherlands, Denmark, Ukraine, England, USA, Canada and Germany. Some of her distinguished students include E. Janulevičiūtė, G. Gedvilaitė, A. Anusauskas, D. Mažintas, I. Petrauskaitė, E. Minkštimas,P.Rudokas, K.Uinskas, A.Radzevičiūtė, A.Racevičius, R.Chačaturjan, M.Jatkauskaitė and many others who are successfully working, performing in Lithuania and many other countries, performing with orchestras and have released many records.
Professor V. Vitaitė is actively taking part in the movement of international piano competitions – she is a member of organizational commitees and juries of M. K. Čiurlionis‘, St. Vainiūnas‘, B. Dvarionas‘, „Muzika be sienų“ international piano competitions, chairwoman or a member of the jury of competitions in the USA, Italy, Greece, Poland, Denmark, Finland, Sweden, Georgia, Latvia she constantly gives master classes, presentations in scientifical conferences in Lithuania and abroad. V. Vitaitė was granted a Vytautas Didysis order in 2003.
„An exceptional trait of V. Vitaitė as an artist – a ray of unique energy that helps her reveal herself and reach excelent artistic results in pedegogics, solo and ensemble performing and methodical-organizational activities. “
Prof. K. Grybauskas
„… prof. V. Vitaitė is and excelent pianist who always delights everyone with interesting concert programmes, as a soloist and member of a duo. She is one of the most-known Lithuanian pedagogues. I admire V. Vitaitė‘s talent, her work that brought her international acknowlegdement, admire and wish her more long years of being the SPIRITUS MOVENS of Lithuanian music life!“
Prof. S. Sondeckis
„…Taitnless taste, intelligence, talent, really wondrous mastery, love for Music and students is her essence…“
Prof. L. Natočenny (Vokietija)