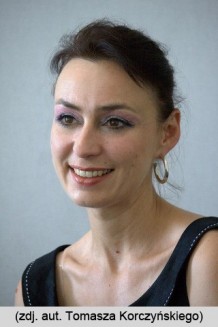 She graduated from the Public Ballet School (class of prof. Marta Mirocka) in Cracow. Her skills in dancing and distinctive dances she gained in France (Le Ballet Légendaire d'Ile de France, Le Bal Paré, VII Conservatorium in Paris, Thěâtre Baroque de France). She is also a dancer of classical Indian dance Bharata Natyam, which studied in Smt. M. K. Saroja in Madras. She graduated from the history of art at the Paris Sorbonne University.

As a choreographer and dancer she cooperates with numerous theaters in Poland, the Warsaw Chamber Opera, the Royal Castles in Cracow, Warsaw and Niepołomice as well as with many other institutions in the country and abroad.. She teaches the history of dances at the Academy of Music in Cracow and Łódź and conducts numerous courses in its specializations.

The dancer had the opportunity several times to work with prominent personalities of the ballet and music world. She prepared the choreography for many Baroque, classical and traditional Polish operas, presented on stages in Poland and abroad. She participated, inter alia, in the preparation of opera and ballet performances under the direction of Jean-Claude Malgoire. She presented also historical dances accompanied by such outstanding virtuosos as: Urszula Bartkiewicz, Elżbieta Stefańska, Kenneth Weiss (harpsichord) and Jaap Ter Linden(Baroque cello).

She is a laureate of the 2nd Parisian Award of the competition La Scéne Française in the technique from characteristic dance as well as the Award named after Zofia Rayzacher at the Festival of Old Music at the Royal Castle in Warsaw.

In 2009 she was awarded by the Minister of Culture and National Heritage of Poland with honors of "Merit for Polish Culture" as well as  decorated by the Małopolski Superintendent of Education - with Medal of National Education Committee  for outstanding contributions to education and upbringing. In November 2010 she was dedicated with „Honoris gratia” – honored for the City of Cracow and its inhabitants.

Romana Agnel is a creator and Executive and Artistic Director of Court Ballet „Cracovia Danza”. The Festival is held annually in summer in Cracow. The forthcoming - 7th edition - will start on the last weekend of July 2011.