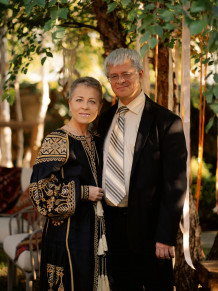 Information about the duo

The piano duo of Iryna Aleksiychuk and Yurii Kot has existed since 1983. Duo is the winner of three international pianoduo competitions, two of which (ARD International Competition in Munich and Murray Dranoff Two Piano Competition in Miami) are considered to be among the most prestigious and difficult music competitions in the world. The duo's repertoire includes works of world classics and original, sometimes exclusive works, created specifically for this duo. I.Aleksiychuk and Y.Kot are performers, and often the first performers of works by many Ukrainian composers (E.Stankovych, G.Lyashenko, Y.Ishchenko, L.Dychko, O.Kostin, B.Filts, J.Lapinsky, V.Efremov, V.Zhuravitsky, S.Lunev, M.Kovalinas and others).

Annotations to the works of Irina Aleksiychuk

The "Viy" suite for two pianos based on a novel by M.V.Gogol was created in 2001. The idea of ​​the work is based on the comparison of two figurative spheres: real (using intonations of Ukrainian songs and dances) and otherworldly, where the coloristic effects of sonorism and aleatorics are widely used.

The concert fantasy "On the Night of Ivan Kupala" was created in 1997, especially for the International Music Festival, which took place in Dresden (Germany), and at which the premiere of this work was performed by I.Aleksiychuk and Y.Kot. It is a one-part piece consisting of a slow introduction and a main part in fast motion. The introduction depicts the overall picture of this magical picturesque night with its mystery and fabulousness. The main part is a picture of a festive action, in which the development of events goes with the gradual increase of emotional tension and reaches its culmination in the code, where the general dance becomes insane.