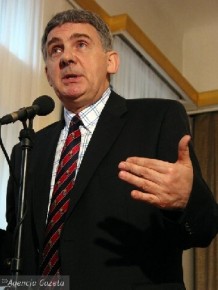 Marek Dyżewski - was born in Legnica in 1946. A Pianist, writer and animator of musical life, graduated from the State Higher Music School in Wroclaw in the field of playing the piano in the class of prof. Barbara Hesse-Bukowska (1971). He also studied art history at the University of Wroclaw, Catholic University of Lublin (1975) and the University of Vienna (1980-1981). He was a scholar of  Vienna Radio (1981-1982), the initiator and artistic director of the Music Days of Old Masters Festival in Wrocław  (1967-1987), resumed Wroclaw Days of Organ and Harpsichord Music  (1992) and created academic music festival Gaudeamus (1997).

He is the former artistic manager of the festival Legnica Cantat, for many years as a journalist he is engaged in radio and television journalism. The author of audiovisual performances and the person highly regarded in the international forum for his radio work. He commented on the radio and television various festivals and international music competitions, including .: the H. Wieniawski Violin, the Chopin pianist  and the G. Fitelberg conducting. He is conducting guest lectures and seminars in all Polish music schools and  at several universities.  He also lectured in Germany, Belgium, Austria, Russia, France and Spain. In Wrocław Academy of Music, he was employed in the years 1971-1974 and between1982-1984 and in the years 1990-1994 he did his duty as the rector there.