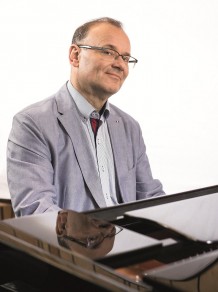 Was born in Kielce. Graduated from the Academy of Music in Cracow in the piano class of professor Irena Sijałowa - Vogel and postgraduate studies at the Odessa Conservatory in the class of professor Anatolij Kardaszow. He completed master classes under the direction of professor Viera Gornostajeva and Gunter Ludwig. He is leading a rich artistic career as a soloist and chamber musician. He has performed with most of the Polish orchestras, led by the Sinfonia Varsovia, Polish Radio Chamber Orchestra "Amadeus", the Symphony Orchestra of Polish Radio and Television in Cracow. He has performed abroad in Germany, Sweden, Denmark, Slovakia, Russia, Lithuania, Latvia, Ukraine, France, Portugal, Belgium, USA. He cooperated with a group of prominent Polish conductors, it's worth mentioning the names of Jerzy Maksymiuk, Jerzy Salwarowski, Marek Pijarowski, Agnieszka Duczmal, Tadeusz Wojciechowski. As a chamber musician he cooperated with such artists as: Teresa Żylis - Gara, Małgorzata Walewska, Wiesław Ochman and Adam Zdunikowski. In addition, he has performed as well with Ludmiła Worobec - Witek, Saskia Szreder, Bartłomiej Nizioł, Wieniawski Quartett, Multicamerata. He is constantly cooperating with the orchestra "Lviv Virtuosos". In 2005 he gave a recital at Carnegie Hall. He has made recordings for Radio Kielce and Russian Television. He has got in his output five CDs with solo and chamber music. Among such recordings made ​​by Arthur Jaroni  is a unique rarity, that is seldom performed and recorded: Concerto for piano and violin by F. Mendelssohn-Bartholdy. He is director of the Krystyna Jamroz International Music Festival  in Busko Zdroj and leads the author's periodical event Salon Chamber Music in Kielce. For his artistic and organizational activities he received a number of prestigious awards, including: the award of Kielce Voivode,  Marshal of Świętokrzyski Voivodeship, Award of the City of Kielce, statues: " Leader of the Region" in the field of culture, the Golden Emeric. He was decorated with brown Cross of Merit.