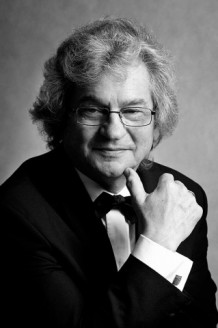 Andrzej Tatarski studied piano with Olga Dąbrowska at the Music Academy in Poznań, winning a diploma with distinction. In 1969-70 he perfected his skills under the guidance of Vlado Perlemuter in Paris.

He has developed a fine career as a solist and in chamber music. Foreign tours have taken him to the United States, Japan, South Korea, Jamaica, Cuba, Germany, France, Britain, Italy, Austra, Belgium, Slovenia, Switzerland and the former Soviet Union.

He has performed at such prestigious festivals as the Poznań “Musical Spring”, the Festiwal of Polish Piano Music in Słupsk, the “Warsaw Autumn”, The Days of Kraków Composers, “Wratislavia Cantans”, and the Festiwal of Polish Contemporary Music in Wrocław. He has given Chopin recitals at the composer`s birthplace of Żelazowa Wola and performed recitals of Szymanowski`s music in Poland and abroad. A prominent place in Andrzej Tatarski`s extensive and diverse solo and chamber repertoire is occupied by works by 19th and 20th-century Polish composers as well as by French music. He is the first Polish pianist to have performed Olivier Messiaen`s cycle “Catalogue d`oiseaux”. He has given many first performances of pieces by contemporary Polish composers.

Andrzej Tatarski has made numerous recordings for Polish and foreign radio stations, for film and television as well as on various labels. He has made the first ever recording of piano works by Henryk and Józef Wieniawski, Raul Koczalski and Ignacy Fredmann (for Selene) and Karol Szymanowski (for Dux). He has made recordings with such prominent Polish musicians as Bartosz Bryła, Michał Grabarczyk, Konstanty Andrzej Kulka, Joanna Domańska, Joanna Kozłowska, Stefania Toczyska, Bartłomiej Nizioł, Piotr Pławner and “Wieniawski” Quartet, as well as the Japanese violinist Asa Konishi. He has sat on the juries of many national and international piano and chamber music competitions, and given master classes. Andrzej Tatarski teaches piano at the Ignacy Jan Paderewski Academy of Music in Poznań.