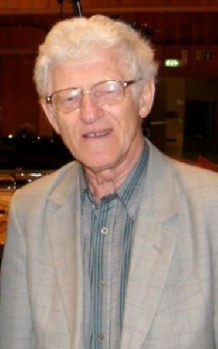 He is one of the most prominent piano teachers. He was born in 1936 in Czestochowa. He graduated with honors from the Academy of Music in Katowice in the class of prof. Władysława Markiewiczówna as well as in Paris in prof. Magda Tagliaferro. Since 1962 he has been teaching home university. In the years 1979-1982 he taught piano at the Music Academy in Stuttgart. He has educated a large number of concert pianists and teachers. His pupils are i.a.: Krystian Zimerman, Joanna Domańska, Jerzy Sterczyński, Krzysztof Jabłoński, Magdalena Lisak, Zbigniew Raubo, Rafał Łuszczewski, Beata Bilińska and Stanisław Drzewiecki.
He participated in the work of the jury in the most significant music competitions i.a. named after The Belgian Queen Elisabeth, P. Tchaikovsky, Van Cliburn, F. Busoni, F. Chopin,whose between 2000 and 2005 he was the chairman of jury. For many years he is a member the Frederic Chopin Association Board in Warsaw. He conducts masterclasses in many musical centers of the world, including annually from 20 years  the Summer Academy of Music "Mozarteum" in Salzburg.
Andrzej Jasinski in 1960 received the Grand Prix at the Maria Canals International Piano Competition in Barcelona. In the following year he appeared with the RAI Orchestra in Turin under the direction of Carlo Zecchi. Since then has been performing in most European countries and in Uruguay, Brazil, the USA and Japan. He has performed in duet with a pianist Joseph Stompel and NOSPR wind quintet. For the Polish Radio together with Polish Radio Orchestra in Warsaw and WOSPRiT Katowice he has made many recordings.
In April 2006, he hold the position of a promoter-arbitrator in the proceedings that granted Krystian Zimerman with a doctorate title of honoris causa in Academy of Music in Katowice.
Andrzej Jasinski is the founder and artistic director of the Silesian Piano Competition for high school students, whose seventh edition was held in Zabrze in 2007. In recognition of his artistic achievements and pedagogical Academies of Music in Warsaw and Katowice gave prof. Andrzej Jasiński a doctorate title of honoris causa. He was also decorated with the Gold medal "Merit to Culture - Gloria Artis" and the Commander's Cross of the Order of Rebirth of Poland.